Gabriele Micheli plays with laid-back poise, lovingly caressing the keyboard as he glides effortlessly through the pages of Kuhnau's graceful scores, ornamenting tastefully as he goes. Each of the seven Partien (dance suites) follows more or less the same five-movement pattern - prelude, allemande, courante, sarabande, gigue. A note on the instrument reveals that it is a 1728 Zell (Hamburg) original, modified in the 1990s by Italian craftsmen to give it an extended range and, to boot, a view of Montecarlo in Lucca hand-painted onto its top surface. It certainly has the fine tone of a modern instrument - none of the stridency associated with certain historical models. Here too Kuhnau's music is unfailingly urbane and colourful. Thirteen years later listeners still await the remaining, minor-key half of the Neue Clavier-Übung from Dynamic.
Byzantion
Articolo originale 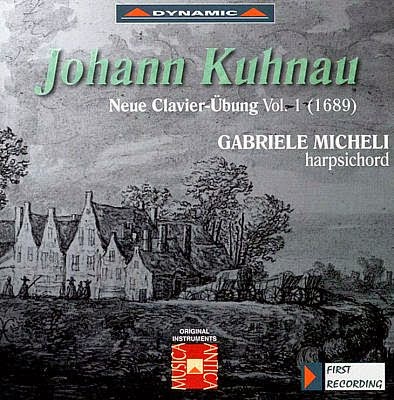 I've been on a solo harpsichord kick in recent weeks and it's still
going strong. I have recommended a few fine discs and now have another
one to tell you about. Johann Kuhnau (1660-1722) was Bach's immediate
predecessor as Kantor of St. Thomas in Leipzig and a fine composer as
well. His Biblical Sonatas for Harpsichord are Kuhnau's most well known
body of works. About two years ago, Robert King recorded for Hyperion a
disc devoted to Kuhnau's sacred choral works; that was a stunning cd of
wonderful music performed to perfection. More recently, BIS issued a
recording of Magnificats directed by Suzuki; one was by Kuhnau and again
revealed masterful musical talent.
Almost by accident, I found a Dynamic recording of Volume 1 of Kuhnau's
Neue Clavier-Ubung; this volume consists of nine harpsichord partitas all
in major keys. Volume 2 consists of another nine partitas all in minor
keys. Gabriele Micheli is the performer on this Dynamic disc. He has also
recorded for Nuova Era, Musica Oscura, and Bongiovanni. One could well
wonder if recording only major key works is a good idea, but I suppose that
Micheli gave higher priority to getting a whole volume on to one disc.
With just three exceptions, each Partita has the following sequence
of movements: Praeludium, Allemande, Courrante, Sarabande, and Gigue.
The exceptions are that the third Partita in E replaces the Gigue with a
Menuet, the fourth in F begins with a Sonatina, and the sixth in A replaces
the Sarabande with an Aria.
Kuhnau's music is excellent and provides a similar level of inspiration
and enjoyment to the harpsichord works of Froberger and Fischer. The
recorded sound is good for current times, although it could use a little
more richness which an equalizer easily locates. Gabriele Micheli is a
fine representative for Kuhnau's Volume 1. I don't have any comparison
recordings, but he sounds fully idiomatic, technically sound, and obviously
loves the music he is performing.
My sole reservation concerns the total reliance on major keys. I'm finding
that one or two Partitas at a time is about all I can handle. Does anyone
connected with the recording know how to spell 'contrast'?
Don's Conclusions: I'm glad to give this Kuhnau harpsichord recording
a hearty recommendation with the one reservation about an entire disc in
major keys. If you can easily listen to the whole disc at one sitting,
you have the patience of Job. The Dynamic catalog number is CDS 265; it
was recorded in February 2000. I do believe that France will be my next
destination; I'm ready for heavy-duty ornamentation.
Don Satz
Pubblicato da Gabriele Micheli a 14:38 Nessun commento: